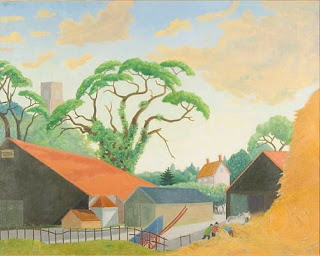 The first item to be acquired through this project is an oil painting by Claughton Pellew-Harvey (1890-1966) which was purchased at auction at the end of October. It is a work of striking colour and vibrancy that depicts the village of Trunch in Norfolk, near where Pellew-Harvey lived, in about 1930.

Pellew-Harvey was a friend and associate of the artist brothers John and Paul Nash – he and Paul were at the Slade School of Art together – and one of that group of artists of the inter-war period that found inspiration in themes of nature and the rural landscape. For Pellew-Harvey this was particularly poignant because he was imprisoned as a conscientious objector in the First World War and thereafter sought solace deep in the Norfolk countryside with his wife and fellow artist Kechie Tennent (1888-1968).
Posted by Roy Brigden at 04:06