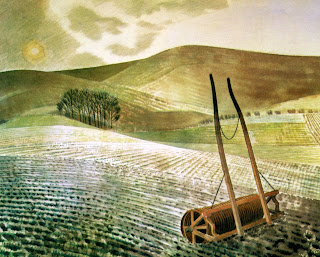 Eric Ravilious (1903-1942), with Paul Nash as one of his teachers and Edward Bawden as a close friend, was an artist and designer who expressed the mood of the inter-war English countryside as powerfully as anyone. His downland scenes of the 1930s, drawing on his Sussex boyhood, are very human in scale and light in touch and yet there is a more sombre tone beneath, part melancholy and part nostalgia for something lost. 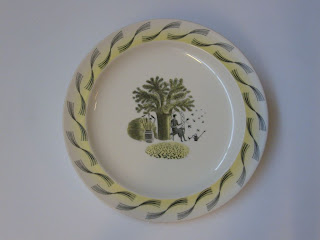 Ravilious brought this same perspective into a wide range of commercial design commissions. One claim has it that it was Noel Carrington – see earlier post about Puffin Books – who introduced him to Wedgwood in 1936. His designs for them, described as examples of archaic modernism, included the Garden and the Harvest Festival dinner services in the years immediately before the Second War. Ravilious died in 1942 whilst on duty as a War Artist with the RAF. Wedgwood revived the two dinner service designs in the 1950s. A plate from each has been acquired for this project. 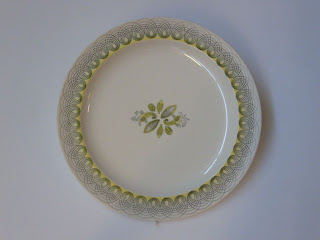 Eric Ravilious' son James has also made a significant contribution to rural culture. His photographic record of daily life in his Devon village is second to none and has become a staple of rural life museum shops.