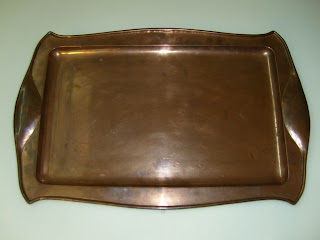 This copper tray is the latest addition to the project. It bears the stamp of the Keswick School of Industrial Arts and was made in about 1903. The School was a scion of the Arts and Crafts movement of the second half of the nineteenth century and was dedicated to the promotion of hand-crafted skills and of inspiration drawn from the natural world, as a way of combating the perceived de-humanising effects of industrialisation.

The school was founded by Canon Hardwicke Rawnsley (1851-1920), friend of John Ruskin and Beatrix Potter, campaigner for the protection of the Lake District and co-founder and secretary of the National Trust. It was initially based in parish rooms close to Rawnsley’s church at Crosthwaite, near Keswick. In 1894, the school moved to purpose-built premises and through its apprentice scheme and night classes steadily achieved a national reputation in decorative metalwork.

The school changed and diversified over the years but remained in operation all the way through to 1984. The tray is a reminder from the early twentieth century of a social philosophy set within a rural context. Rawnsley is a key figure in the origins of the conservation movement.
Posted by Roy Brigden at 08:16