There should be a place in this project for some of those less lauded but now indispensable items without which life on the land would be that much more difficult. So ran the thread of a lively discussion last week on the online forum of Farmers Weekly readers. 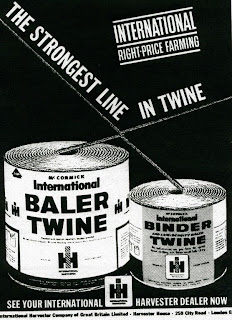 Baler twine in particular received many votes, with contributors vying amongst themselves to record its multitude of secondary uses on the farm: everything from calving ropes, to an emergency repair on a water main, to replacement bucket handles. No farmer it seems leaves home without a few strands in his pocket, just in case they might come in handy to mend a bit of fencing or tie up a gate. 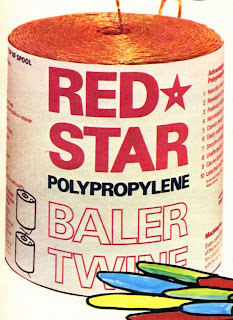 It all goes back to the introduction of the reaper binder which by the 1890s was tying its sheaves with string, rather than the wire that was tried first. Binders were later replaced by combines but hay and straw balers continue to use large quantities of twine. Originally, the string or twine was made from fibres of the sisal plant but since the 1970s, polypropylene - a very strong and virtually everlasting man-made fibre - has taken over and become a ubiquitous part of the countryside.

Wellington boots were amongst other items mentioned. It's difficult to imagine life without them. I don't know when rubber boots became commonplace on the farm. We'll have to start logging their appearance in the photographic archive. This is an image from 1947: 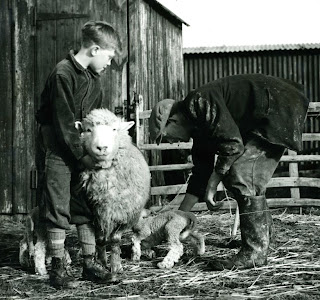 Prior to the tying mechanism on binders, there was a machine called a tip reaper. This was similar to a binder but it delivered loose untied sheaves,of a size determind by the second man on the machine, on to the ground. They were then individually tied up using the stems of the cereal to form tied sheaves which were then stood up in lots of six or eight to form stooks or attocks. Such a machine was in use in 1940 on the farm where I was brought up, when, during the ploughing up campaign, older machines were pressed in to service. I have a picture of harvesting using a tip reaper on my grandfather's farm sometime between 1916 - 1918.
Wellington boots were worn by my father in the second world war when hand milking cows and general field work. I remember the day when, removing his boot, he found a lively frog which had hitched a lift.

Not wellies, but 'water boots' here in Norfolk.

Wellington boots made a huge impact on the daily life of agricultural workers. They are associated with the countryside and rural people in the popular imagination, and have been in constant use since the 1920s/30s. Moreover they have recently been adapted to new uses e.g. a fashion items at music festivals.

A true icon of the countryside.