How would you represent the twentieth century countryside through objects? What items do you think we should add to our wish list for each decade of the century?

It might be a painting or a work of art that somehow expresses a mood of the time. It could be an everyday object that instantly connects with a particular era in the countryside. Perhaps it might be an object with a special story to tell, and a connection with an event or a person. 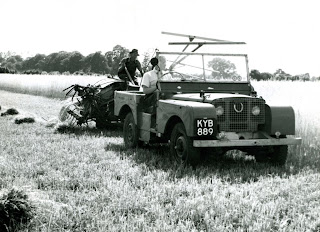 We could turn part of our focus on some of the iconic objects of the countryside that went on to have a much wider impact upon twentieth century culture. The Land Rover is an example. It originated in the 1940s as a no nonsense, all-purpose farm vehicle that could both work in the field and go off to market. By the end of the century it had become an upmarket style icon in town as well as country. How and why this became so is part of what the project is about.
Posted by Roy Brigden at 07:18

What about a milking stool? three-legged possibly - perhaps some had four legs. They were used for centuries prior to the demise of hand milking in the 1940's. I handmilked cows prior to and after school up to 1946. A good milker could milk eight cows per hour each giving up to three gallons in the morning and rather less in the afternoon. I expect the stools became part of the 'lock,stock and barrel' handover to the next tenant when father retired in 1947.He feared at that time that farmers would be let down by the government as they had been after the first world war - but this did not happen until much later.

Today it's snowing. My neighbour sets aside her potato peelings to put on end keep in the fire overnight. Her son, swathed in plastic bags is going with all the village boys to make snowmen on the Castle. He's taken coal and a carrot for its eyes and nose and will come back to soup and dumplings.
When collecting, we need to keep an eye on the alternative uses for objects, and especially for those things at the borders of collectibility.