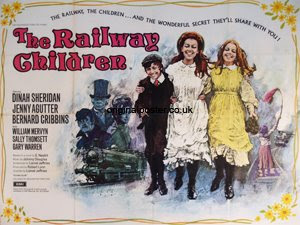 This is an original poster for the film version of Edith Nesbit's 1906 novel of the same name which premiered at Christmas 1970 and has been a holiday favourite ever since. The story is of a middle class family fallen on hard times - when the father is wrongly imprisoned - and obliged to leave the comfort of their suburban villa for life in the country where the nearby railway becomes the focus of the children's world. The countryside and its people, however humble, are projected as a metaphor for purity of mind and generosity of spirit that more than make up for the loss of the material benefits of the town.

Lionel Jefferies wrote the screenplay and directed. Jenny Agutter starred as Bobby, Dinah Sheridan as the mother and Bernard Cribbins as Perks the station master. The film was shot on the Keighley & Worth Valley Railway, a preserved steam line. It followed a BBC TV serial of 1968, shot on the same railway and also starring Jenny Agutter but the film version overshadows everything else including the book itself.

It is a deliberately nostalgic film set in the Edwardian era and with the Bronte country of the West Riding of Yorkshire also taking a starring role.
Posted by Roy Brigden at 08:35

Good to see that you have purchased some film posters. I think this has added an interesting dimension to the project.

A nostalgic vision of the countryside is emerging as a strong theme throughout the material you have currently selected. I wonder what material exists that could stand against this view of rural Britain?