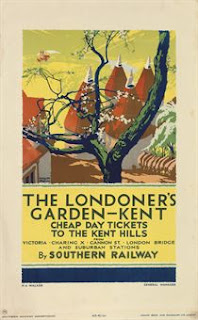 The two posters here, recently acquired, date from 1926. The message on both is central to the theme of this project and the relationship between town and country. They are by F.Gregory Brown (1887-1941), well known in the interwar years as a landscape painter, illustrator and textile designer. For the railway companies, the great popularity at the time of hiking and rambling offered positive marketing opportunities for their commuter routes in the off-peak weekend periods. 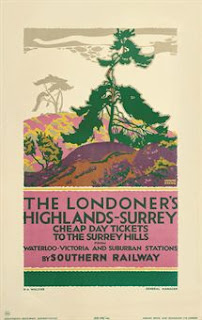 Writing of Manchester in this time, C.E.M.Joad wrote 'singly, in couples, in groups or organized in clubs young people have formed the habit of going on Saturdays and Sundays and, increasingly, for the whole weekend, into the country. You can see the living witnesses of this revolution at the Central Station at Manchester early on a Sunday morning, complete with rucksacks, shorts and hob-nailedboots, waiting for the early trains to Edale, Hope and the Derbyshire moors. Looking at them, one might be tempted to think that the whole of Manchester was in exodus' (from The Untutored Townsman's Invasion of the Country, 1946.
Posted by Roy Brigden at 08:17 No comments:

Skewbald and other pony stories of the 1920s/30s

Orlando the Marmalade Cat's creator Kathleen Hale was taught fine art at Reading by Professor Allen William Seaby (1867-1953). He was a painter and woodcut artist who delighted in wildlife subjects. He also wrote and illustrated a very popular series of pony stories for children, beginning with Skewbald The New Forest Pony in 1927. 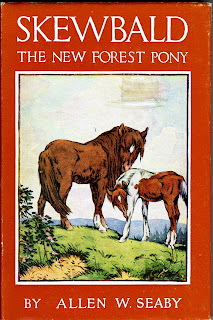 It's more than a story about a pony, it's an introduction to the ecology and the life of the Forest itself. It was followed by Exmoor Lass and Other Pony Stories the following year. The University collection has a signed copy of the sequel Sons of Skewbald which first appeared in 1937. 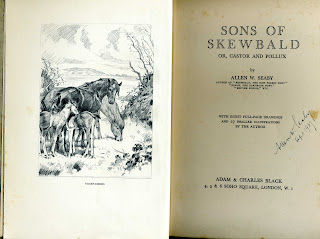 In the Notes at the beginning, Seaby details some of the changes that have occurred in the Forest since the first Skewbald book a decade earlier. The fate of the ponies was dependent now not so much on their use in the coal mines, or as meat on the continent, but on their rising popularity as riding horses for children. The motor car represented a new threat because of the number of ponies killed and injured on the Forest roads. Seaby also railed against plant robbers who were causing the disappearance of many of the Forest's rarer species. 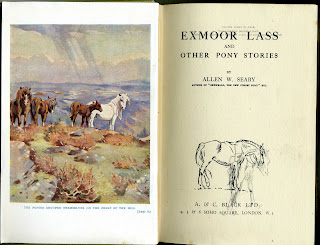 Jenny Kendrick of Roehampton University will be talking about the wider significance of Seaby and his pony stories at the Collecting 20th Century Rural Culture conference at the Museum of English Rural Life on November 4th. More details of the conference can be found on the Museum's website.
Posted by Roy Brigden at 08:08 1 comment:

This is opening up a new theme of children's literature and its cultural influence on perceptions of the countryside. To maintain a tenuous motoring link from the previous post, I have included the illustration below from Kathleen Hale's story Orlando Buys a Farm, orignally published in 1942. 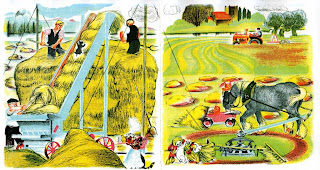 On the right, just below the horse's head, Orlando the Marmalade Cat can be seen driving his car with a hay sweep attached to the front. The use of cars in the hay meadow was quite a common sight in the 1930s. These were old, big-engined cars that still had life left in them but little second hand value at the time and could be bought very cheaply. With a hay rake or sweep bolted to the front, they were ideal for trundling the finished hay across a field to where the stack was being built. The picture is full of other accurate detailing: the individual components of the horse gear used for driving the elevator; the elevator itself; and the rolled up temporary canvas tilt, supported by poles and guy ropes, that kept the stack dry, should it rain whilst under construction. In her autobiography, Kathleen Hale (1898-2000) recalled how she used to sneak into agriculture lectures and spend lots of time at the College farm whilst an art student at Reading during the First World War - in fact her student residence was St Andrew's Hall, which now is home to the Museum of English Rural Life. 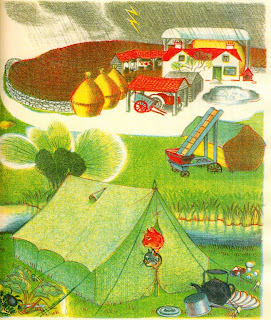 Hale's first Orlando book was A Camping Holiday of 1938, from which the illustration above is taken. The Orlando character emerged from stories that she made up to amuse her own two sons and in this case drew heavily upon her love of the countryside and childhood memories of camping holidays. Further published adventures followed as Orlando became a big hit with children in the 1940s and 50s. There were radio spin-offs and even an Orlando ballet at the 1951 Festival of Britain. 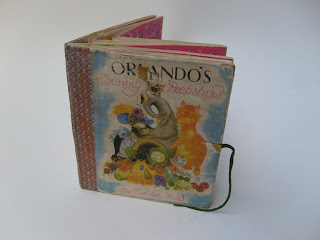 Orlando's Country Peepshow was a pop-up book that appeared in 1950 and gave more opportunity for Hale to display her sound working grasp of farming practice with a scene for each of the seasons. 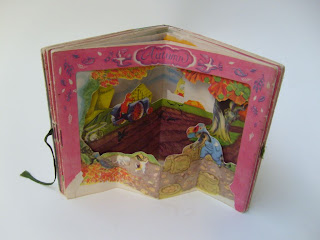 This copy, along with the other examples of Hale's work, are from the Children's Collection - part of the University's Special Collections held alongside the Museum.
Posted by Roy Brigden at 03:09 1 comment: