The latest two acquisitions relate to the post-War, moving forward and new beginning, aspect of the 1940s. They are two original lithographs from the School Prints series of 1946 and 1947. This one, No.3 in the first series of twelve issued in 1946, is titled Tractor and was by the artist Kenneth Rowntree (1915-1997). 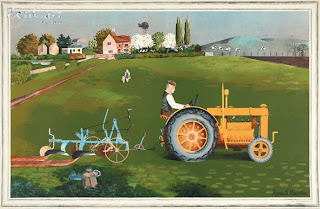 School Prints Ltd was an idealistic enterprise set up originally in the 1930s with the aim of making available to schools, and particularly those children who would probably never visit a gallery, reproductions of great paintings. It was the brainchild of Derek Rawnsley, grandson of Canon Rawnsley of The National Trust fame (see earlier post). In 1941, now serving as an RAF pilot, he married the equally well connected Brenda Hugh-Jones and it was she who was to keep the School Prints project going after his death two years later and once her own distinguished war service was over.

With the idea now to commission artists to produce 'original' lithographs for sale to primary schools, Brenda Rawnsley put a team of experts and advisors together. It was headed by Herbert Read who has been described as the leading spokesman for the arts of his generation, an anarchist and a visionary who believed that art should be the basis of all learning. 'Education through Art', he wrote, 'is education for peace'.

Kenneth Rowntree a Quaker and conscientious objector, had been one of the artists commissioned during the war by The Pilgrim Trust for its Recording Britain project with the purpose of distilling aspects of heritage, landscape and the British way of life that might not survive the hostilities. In 'Tractor', he provides a soothing image of pastoral peace and calm to heal a young generation scarred by war.

In the tractor and plough, Rowntree's distinctive style of the very flat but highly detailed image is evident. He may well have taken the similar type of views to be found in manufacturers' catalogues of the day as his guide. The tractor depicted is clearly a Standard Fordson, in the harvest gold livery that was first used in 1937. 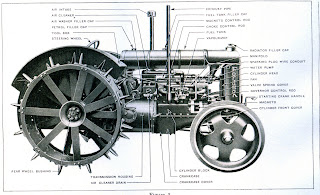 And the plough? A Ransomes No.12 two furrow self-lift - a common tractor plough of the period made by the famous Ipswich manufacturer.

Any consideration of the countryside in the 1940s will tend to fall into two parts. On the one hand there is the War, and on the other there is what happened – in the way of a new beginning - immediately following. To represent the Second World War, we have purchased an original signed poster dating from 1942 by Abram Games (1914-1996). 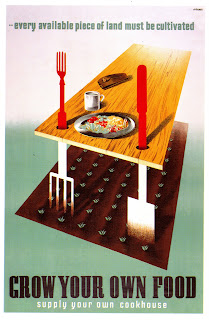 Games was one of the most influential graphic designers of the twentieth century with a gallery of iconic images, including the emblem for the 1951 Festival of Britain, to his credit. He was officially appointed War Office Poster Designer and came up with 100 designs, among them a couple of Grow Your Own Food examples. Posters and slogans were a vital means of communication and encouragement at the time.

1942 was a critical year in the War for food supplies. The Battle of the Atlantic in the spring threatened to throttle imports with 275 merchant ships being lost in March alone. The national food production strategy demanded that a further 1.75 million acres of land be ploughed to help make up the shortfall whilst in the same year conscription of farm workers was lowered to the age of 18 and drained a further 100,000 men from the land. Recruitment of Land Girls was accelerated and the nation at large was enjoined to do its bit.

Games’ poster, with its bottom line of ‘supply your own cookhouse’ was directed at the military as an encouragement for service personnel to turn available parts of their bases into allotments for food production.

Eric Newton, writing about posters in the journal Art and Industry in July 1943 said: 'Suddenly with the outbreak of war, the poster trebled its importance. From being a commercial luxury it became a national necessity. Yesterday it was a frivolous temptation. Today it is a weapon to be reckoned with.'
Posted by Roy Brigden at 05:48 No comments:

This subject will crop up more than once over the course of the project because of the enduring way that toys both shape and reflect notions of farming and the countryside from an early age. 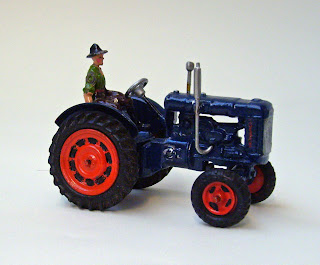 I’m starting with a tractor because it is one of those instantly recognisable objects, like the steam train, that children are drawn to almost intuitively, whatever their background. This is the Fordson Major die-cast toy tractor, No.128F, that was made over the period 1948-1958 by W.Britain Ltd. 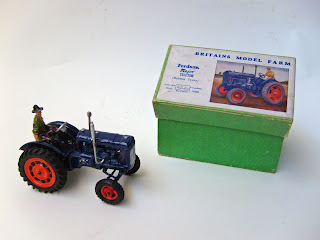 This was the first new tractor to be made by Britains post-War. Until the 1970s, they made only Ford and Massey Ferguson tractors but thereafter added many other manufacturers and machines to the list. The older examples like this one are no longer toys as they have become highly collectable and fetch prices way beyond pocket money levels - particularly if the original box is intact. 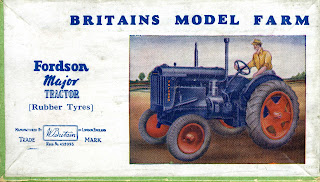 Britains was founded by William Britain senior (1828-1906) and specialised initially in toy soldiers. But after the First World War, market demand for less militaristic toys saw it branch out into the Home Farm Series of animals, implements and other paraphernalia of the farm. It became a household name and the brand still exists although the firm was bought out by Ertl, another famous die-cast toy maker, in 1997.

The Fordson Major E27N tractor was launched from the Dagenham factory in 1945. It was a step up from the smaller pre-War type of Fordson and was available with hydraulic three-point linkage and a range of mounted implements. By 1951, 200,000 had been built for use in Britain and overseas. 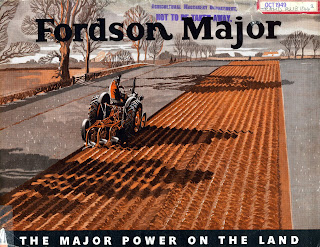