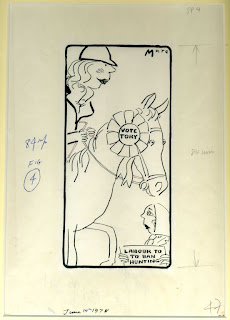 As it's election time, here's the original pen and ink version of a political cartoon that appeared in The Times on June 14th 1978. The cartoonist was Marc aka Mark Boxer (1931-1988).

The glammed-up rider on the horse with a Vote Tory rosette towers over a rather more prosaic and head-scarfed woman holding a newspaper headline Labour to Ban Hunting. This relates to moves within parts of the governing Labour Party of the day to adopt a more hostile approach to hunting. Tony Benn, chair of the Home Policy Committee, was trying to get a commitment to ban fox hunting into the Party's manifesto for the forthcoming General Election. A policy pamphlet published in July, Living without Cruelty: Labour's Charter for Animal Protection did indeed recommend a ban but when it came to the 1979 manifesto only hare coursing and deer hunting were included, not fox hunting.

Attitudes to hunting raised tensions within the Labour Party throughout the twentieth century. Some supporters were close to the anti-blood sports Humanitarian League in the early 1900s and some helped set up the League for the Prohibition of Cruel Sports in 1925. Private members' bills on the subject were periodically raised, without success, in Parliament. On a more pragmatic level, the Party hierarchy was obliged to recognise the level of attachment in rural areas across the social classes to hunting and other field sports if it wasn't to be perceived as solely an urban political force.

Mark Boxer's cartoons were first seen in the late 1960s, first in The Listener, later in The Times and finally The Guardian. He was also editor variously of the Sunday Times colour supplement and Tatler.
Posted by Roy Brigden at 09:42 No comments: 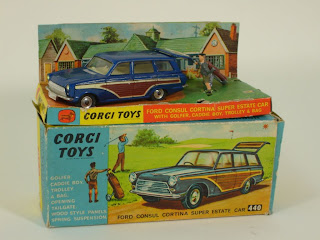 The Ford Consul Cortina Mark 1 was introduced in 1962, with the 1500 super estate version - complete with American-style mock wood panelling - following in March of the following year. This was an appropriate vehicle for Mr Middle Manager to be seen driving to his local golf club at the weekends.

The craze for golf spread to the middle classes in England at the end of the nineteenth century and a flurry of courses began to appear alongside the new suburban villas close to larger towns and cities. Some subsequently disappeared beneath further inexorable housing development but the second half of the twentieth century brought widening popularity to the game and the creation of hundreds of new courses in rural or semi-rural locations. The Dunham Forest Club, for example, is within 30 minutes drive of both Manchester and Liverpool city centres and was formed in 1960 out of wooded parkland that had formerly been part of the Earl of Stamford's estate. It was a process of suburbanising the countryside that still continues. 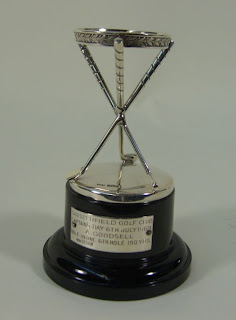 This is a Hole-in-One golf cup (the top should be cradling the ball) that was awarded to Albert Goodsell for a hole in one at the 190 yard sixth hole of the Chesterfield Golf Club on 6th July 1969. The club's history is not untypical. It was founded in 1897 and moved to its present site on the outskirts of Chesterfield in 1906. It was then only nine holes but in the later 1920s the neighbouring Yew Tree Farm was acquired and a further nine holes added. Selling farmland for conversion to golfing fairways was one possible option for beleaguered estate owners during the inter-war agricultural depression.
Posted by Roy Brigden at 05:56 No comments: 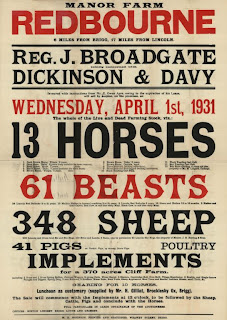 Since the piece below was written in 2010, more information has come to light about what happened at Manor Farm in 1931 via the descendants of Mr Ayre. The rather gloomy inference I drew from the stark detail of the poster is misplaced, notwithstanding the very difficult conditions for farming at the time. The sale of livestock and equipment marked not an end but rather a new beginning because ownership of the farm itself passed that same year into the hands of Mr Ayre's daughter and son-in-law, and the family have continued to farm there to the present day.

The key feature here is the date, 1931, because this is the story of a farm broken by the terrible agricultural depresssion of the inter-war years. The place is Manor Farm Redbourne, between Brigg and Lincoln, and we're told that Mr E.Owen Ayre's lease has expired, thus necessitating the coming sale of everything - stock and equipment - off the farm on April 1st. From that we can probably assume that the lease ran out on the previous quarter day which would have been 25th March, or Lady Day.

Mr Ayre can't be moving to another farm, because he's selling all he has, nor is he handing over to a son, because the lease is not being renewed. I suspect that he is getting on in years, and is a traditional type of farmer, perhaps a little old fashioned, who is unable or unwilling to carry on in the very severe economic conditions prevailing at the time. Why old fashioned? Well, it's a 370 acre mixed farm worked entirely with horses. There are six prime plough horses here - Prince, Daisy, Short, Duke, Turpin and Captain - together with some younger ones being brought on and for lighter work. Clearly, Mr Ayre was not dabbling with those new-fangled tractors and the list of implements for sale shows nothing that might be considered modern or forward-looking at the time.

Tough conditions in farming lasted through the 1920s but plumbed new depths in the period 1929-32, and the grain growing areas on the eastern side of the country were most severely affected. World markets were glutted with cereals and there was no money in trying to grow them at home. By the beginning of 1930, prices were below the level of 1914 and in the coming year fell by another third. The overall agricultural price index, which included all farming commodities, stood at 292 in 1920 but was down to 120 in 1931 and still falling. It was reckoned that the average cost of growing wheat was £8 per acre and the average return to the farmer no more than £3 or £4. No wonder that Mr Ayre decided that he couldn't carry on. He wasn't alone, for others also were cutting their losses and selling up. Landowners, often unable to let vacant farms even at a knock-down price, were left with little choice but to abandon them until conditions improved.
Posted by Roy Brigden at 01:45 No comments: 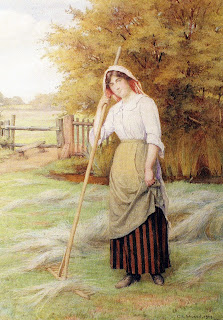 This was our first acquisition of 2010. Charles Edward Wilson (1854-1941) was born in Whitwell, Derbyshire, the son of the village schoolmaster, and studied at Sheffield School of Art. He developed a specialism in rustic scenes, some of which can still be seen on greetings cards today, and exhibited a total of 17 works at the Royal Academy.

The watercolour here of a harvest girl leaning on her wooden hay rake owes something to George Stubbs' famous painting, The Haymakers, of 1785 in which a comparable pose is struck. But this is 1904 and a genre of sentimentalised rural art that was a hangover from the late Victorian period. These gentle rustic scenes of wholesome innocence characterised the way that a predominantly urban and industrial society liked to think of its countryside and its country women. But things were beginning to change fast; and demure portraits of country maidens would no longer be appropriate to the era of the First World War and beyond.

A new breed of women farmers was now making the news, like these two, Miss Andrews and Miss Spencer, who trained at Reading University and the Midland Agricultural College respectively, and in the 1920s took a Sussex farm in partnership to build up a successful dairying and poultry enterprise.
Posted by Roy Brigden at 09:09 No comments: