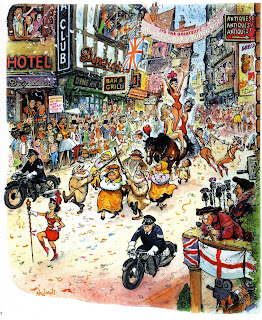 The caption on this illustration when it appeared in Punch in 1960 was 'The Age-Old Custom of Beating the Balm Cake at Abbots Dawdling'. It is a classic comment on the peddling of rural myth and bogus tradition. Surprising perhaps that half a century ago this was already a matter for wry amusement. When the original watercolour came up for sale in a recent exhibition in London of Thelwell's work, it seemed only right to make a rural museum its new home.

Norman Thelwell (1923-2004) is best known for his eponymous pony cartoon books, beginning in 1957 with Angels on Horseback, that have been major sellers worldwide. But for more than 25 years he provided a regular stream of cartoons on rural subjects, often topical, for Punch and the national press as well as other published compilations such as The Effluent Society (1971) and Some Damn Fool's Signed the Rubens Again (1982) - following the ups and downs of country house owners opening their doors to the visiting public. 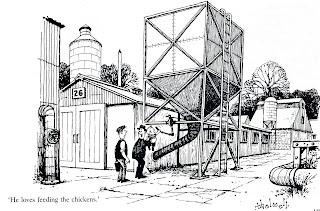 Thelwell was born in Tranmere but his love of the country was ignited by childhood holidays on a farm in North Wales. After War service, during which the military made some use of his natural artistic abilities, Thelwell studied art at Liverpool. This was followed by a short spell in teaching before a new career in freelance cartoon humour began to take off in the early 1950s and enabled him to live the rest of his life in the country, mostly Hampshire. Underlying the light-hearted aspect of his work, was often his own commentary on the changes going on around him.

In his autobiography (Wrestling with a Pencil, 1986) he wrote 'Although my object as a cartoonist was mainly to earn my living by amusing readers, it was also quite possible to express my own feelings on subjects, situations and events about which I felt strongly. Politics I have always found very boring and there was no way in which I could have become a political cartoonist. My interest lies in the minutiae of the human dilemma, the day to day problems of life and the way we are all swept along by events or developments which we feel helpless to influence. I seem to have touched at one time or another on almost every subject under the sun from combine harvesters to computers, rockets to ramblers, paraffin to pigs. But the predominant thread which has always run through my work is my love of and fascination with the countryside: the flesh and bones of these islands'.
Posted by Roy Brigden at 08:02