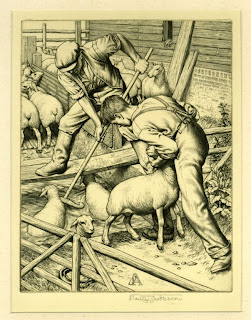 We have taken the opportunity to add to our collection of engravings by Stanley Anderson (1884-1966). This one is entitled Sheep Dipping and is signed in pencil at the bottom. It had been framed with a pristine copy of the Daily Telegraph for January 1934 to provide padding and has the remains of a label on the back for The Birmingham Exhibition 1936 with a price tag of £4 10s (framed). 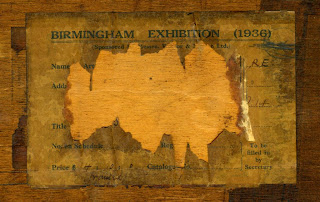 It is one in a series of precisely-observed rural studies that Anderson produced over a 20 year period from 1933 when he went to live in a cottage in the heart of the Oxfordshire countryside at Towersey (now home, incidentally, of the Towersey Village Festival which began in 1965 and is still going strong).

It would be difficult to think of any other twentieth century artist who managed to capture the ordinary business of farming in such clear and accurate detail, so attractively without tipping over into excessive sentimentality. This one, entitled Three Good Friends, shows a ploughman and his team taking a rest: 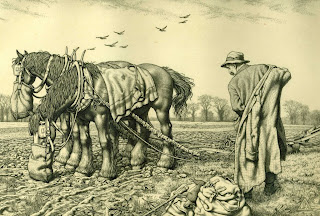 The Bristol-born Anderson was apprenticed to his father in heraldic engraving initially but subsequently studied at the Royal College of Art and Goldsmith's College, where in 1925 he was taken on as engraving instructor. He was a frequent exhibitor at the Royal Academy and became a Fellow in 1941. These engravings were produced in 40 print editions and sold through the Royal Academy and other exhibitions. This last example from our collection has the title Good Companions and shows an early morning farmyard scene as a horse is led from the stable ready to be harnessed to the Buckinghamshire type wagon in the background. 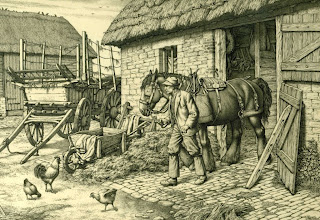