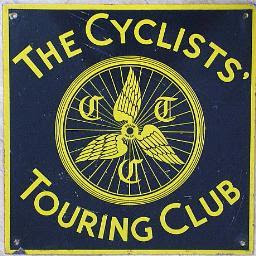 These signs were once a common feature of the countryside, (and some are still to be found) attached to the front walls of selected hotels, bed and breakfast establishments, and tea shops where the Cyclists' Touring Club member would receive a preferential rate. This enamel type appeared in the 1930s, replacing a larger shield-shaped cast iron version that had been used hitherto. The wheel and wings emblem was adopted in 1886, eight years after the Club's foundation to promote the interests of serious 'cycle tourists'. Improvements to cycle technology, including the introduction of the Rover Safety bicycle in 1885 and of pneumatic tyres in 1888, made it a popular form of leisure transport for exploring the countryside and by 1900 the Club had over 60,000 members. Thereafter, it waned somewhat as the early motor car started to attract attention but then came back strongly after the First World War. In the 1930s, the Club enjoyed royal patronage from both George V and George VI. 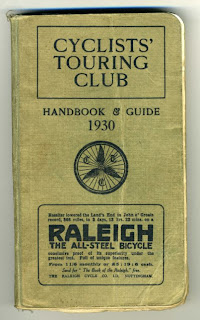 The Club's Annual Guide listed thousands of cyclist friendly establishments by county with their current charges. Each county had a local club representative, known as the Chief Consul. 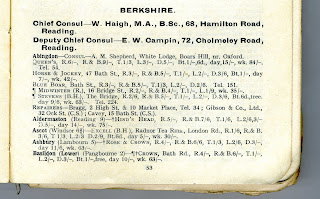 On request, the Club would draw up recommended excursion routes for members to follow for a cycling holiday. In 1955, the first in a series of special cycle-rail day trips was organised with the participants being delivered out of London to a rural spot from where local members would guide them on a circular tour.
Posted by Roy Brigden at 02:07