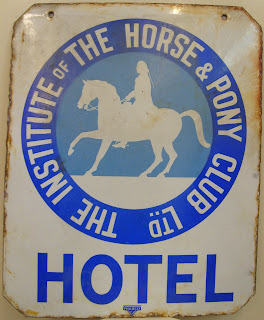 This recently acquired sign relates to one of those key communities of interest in the twentieth century countryside - the Pony Club. The arrival of riding as an organised leisure and sporting activity for children owes much to the rise of an affluent middle class with rural connections in the decades either side of mid-century.

The Institute of the Horse inaugurated its junior branch, the Pony Club, on November 1st 1929 with the aim of 'interesting young people in riding and sport and at the same time offering the opportunity of higher instruction in this direction than many of them can obtain individually'. A nationwide network of district committees was set up, closely allied to the territory and organisation of local Hunts. By 1931, there were 59 Pony Club Branches, with a total membership of just over 4,400. In 1958, membership stood at over 25,000.

An enduring favourite, the Pony Club camp, made its first appearance in 1931 and the sign above is evidence of efforts at the time to create riding-friendly establishments around the countryside. 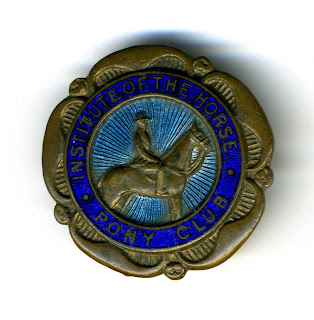 In 1934, the Institute of the Horse and Pony Club merged with the National Horse Association of Great Britain to form the British Horse Society, with the Pony Club as one of its constituent parts.

The Pony Club now has over 110,000 members spread through 18 countries and celebrated its 80th year in 2009 with the opening of new offices at Stoneleigh in Warwickshire, and the announcement of a new President, Lady Lloyd-Webber.
Posted by Roy Brigden at 05:01