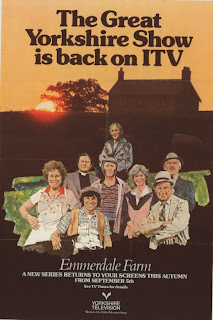 How does TV affect cultural perceptions of the countryside? Does it reflect them or does it shape them - or perhaps a bit of both? Certainly, over the last quarter of the century there was plenty of material, with Yorkshire featuring particularly strongly. Last of the Summer Wine, for example, the world's longest running sitcom, first appeared on the BBC in 1973 and continues to be filmed in and around Holmfirth. Thirsk was the setting for All Creatures Great and Small based on James Herriot's vet stories and first screened over the period 1978-90. Always in ITV's top five performing shows since 1992 has been Heartbeat, a gently nostalgic rural police drama set in the 1960s and filmed around Goathland on the North Yorkshire moors. In each case the programmes have spawned lasting local tourist industry initiatives - Visit Herriot Country etc.

And then there is Emmerdale Farm. Conceived as a kind of televisual Archers, it was first screened in October 1972 with the Sugden family and their farm providing the core storyline. Arncliffe in north Yorkshire was the location for the early shooting, followed by Esholt near Bradford from the mid 1970s. Since 1989, the programme has been known simply as Emmerdale to indicate its transition to a general purpose early evening rural soap. It remains at No.3 in the TV soap rankings. Shooting now takes place at a purpose-built village set on the Harewood estate near Leeds.

I have dated the poster to 1977 because this is the year that Hugh Manning, the Vicar in the picture, first appeared. Trident Television, listed at the bottom, had ceased by 1982. No doubt Emmerdale aficionados will correct me if I'm wrong!
Posted by Roy Brigden at 08:48