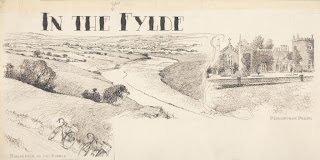 Staying with the theme of cycling and the countryside, here is an orignal pen and ink drawing from 1929 by the most renowned of all cycling artists, Frank Patterson (1871-1952). For more than half a century from 1893, he provided a constant flow of distinctive illustrations for Cycling magazine. And from 1925 he was doing the same for the Cyclists' Touring Club Gazette. Ribchester, the subject here on the left, is a village of Roman origin that sits in a curve of the river Ribble. Roughly midway between Preston and Clitheroe, it is in ideal weekend cycling country. 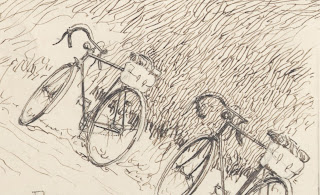 Through thousands of drawings, all in this finely observed style, Patterson captured the essence of the early twentieth century countryside and the joy of exploring it on two wheels in such a way that associating cycling with the rural landscape became fixed in the cultural memory.

Patterson himself was a keen cyclist in his younger days until a knee injury forced him to give up at the age of 35. After completing his studies at Portsmouth Art School, he moved to London in search of work as a jobbing artist and for recreation took to cycling in rural parts south of the capital. 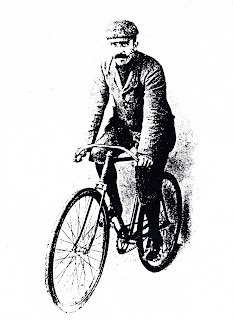 From 1898, Patterson lived and worked deep in the countryside at Pear Tree Farm near Billingshurst, West Sussex. Initially, it was rented at 9d a year and then in 1902 purchased for £5 (in 2008 it was on the market for £1.45 million). Here he lived a dual life, working his land and engaging in country pursuits in the morning whilst afternoons were spent in the study, fulfilling his contract of ten drawings a week for the magazine publishers Temple Press. 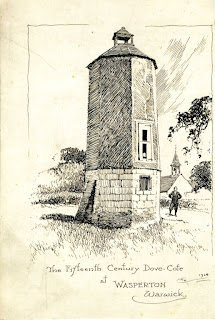 A second Patterson drawing we have acquired for the project, this one dated 1924.
Posted by Roy Brigden at 03:07

I have 2 original Patterson pen and ink drawinks which need a bit of tlc but have noidea how to get a valuation or advice as to wether I should have them cleaned before selling them! Help! They are beautifully drawn of Threave Castle and Kirkcudbright Castle