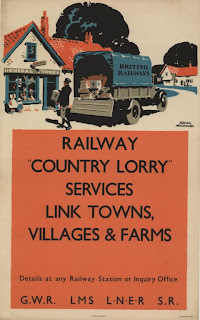 This poster neatly captures the economic importance of the railway network to the rural community in the period either side of the Second World War. And it was the railway's country lorry service that completed the link - for goods in or out - between the nearest station and the village shop, farm or cottage.

Although the poster design almost certainly originates pre-War, I have put a 1940s date on it because I think it has been overprinted with the words 'British Railways' (on the lorry's canvas top) at or around the time of nationalisation in 1948. The initials at the bottom represent the four geographically-based units into which the myriad of smaller railway companies were grouped following the Railways Act of 1921: the Great Western Railway; the London, Midland & Scottish Railway; the London & North Eastern Railway; and the Southern Railway. The poster was printed by the Baynard Press of London, leading colour lithographic printers of the day, who printed many other posters for clients such as London Transport and also The School Prints (see earlier post).

The artist was Frank Newbould (1887-1951) who trained at Bradford College of Art and who was responsible for some of the most iconic travel and transport posters of the 1920s and 30s. For part of the Second World War, he was a poster artist for the War Office, working under Abram Games (see separate post), and produced amongst other things four posters in the series Your Britain Fight for it Now. One is a captivating portrait of the Downs which completely equates a pastoral English landscape with national pride and identity: 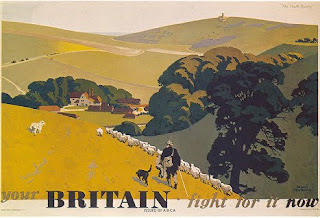 Another is intended to conjure up happy memories - real or imagined - of the travelling fair on the village green with a church tower, symbolising tradition and virtue down the centuries, rising in the background: 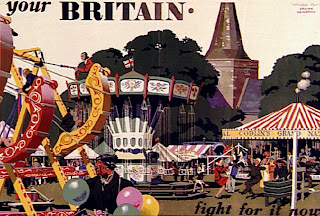 Interestingly, Newbould also worked for the Empire Marketing Board as well.

(apologies for the state of that link!)