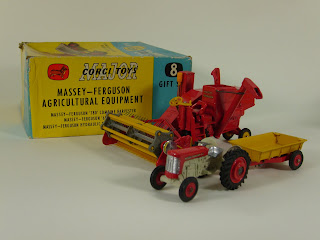 Corgi Major was a range of commercial/industrial die-cast vehicles that the company introduced from 1957. The combine harvester here first appeared in 1961 and this Gift Set No.8, with tractor and trailer added, a year or two later. These were solid, chunky toys with moving parts for little hands to twiddle and with much of their attraction due to the remarkable level of detailing. 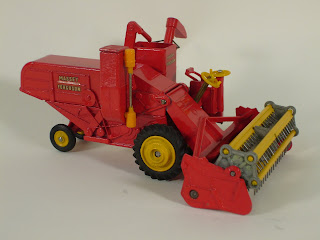 The combine harvester was modelled on the Massey-Ferguson 780 which was built at the firm's Kilmarnock factory from 1953 to 1962. This was the machine that most characterised the new agricultural revolution of the post-War era - a time of settled development for farming following the 1947 Agriculture Act, when the number of combine harvesters in England & Wales rose from 10,000 in 1950 to 50,000 in 1960. 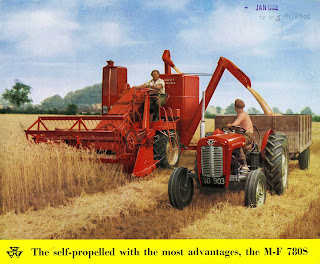 The Massey-Ferguson name came about with the merger of two agricultural machinery manufacturers, Massey-Harris of Canada and Harry Ferguson Ltd of London in 1953. At first, it was Massey-Harris-Ferguson but was shortened in 1958 to Massey-Ferguson in a re-brand that produced also the iconic red and grey colour scheme and the triple triangle logo. At this time the firm accounted for 90% of all self-propelled combines used in the country. 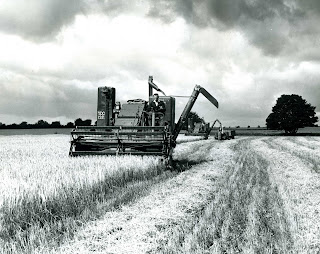 Here are two 780 combines at work on a crop of barley in Gloucestershire in August 1962. The one at the rear is about to discharge its load of grain into the trailer alongside. The combine was the last stage in a long process of mechanisation of the grain harvest that stretched back to the early nineteenth century. Instead of the army of workers formerly needed to cut and gather the crop for threshing at a later stage, now it was harvested and processed in a single operation in the field. 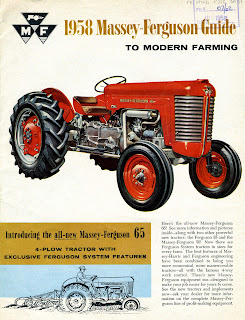 The tractor in the Corgi set is a Massey-Ferguson 65, a 50 horse power model introduced in 1958. The Mark II appeared in 1960 and altogether a little over 50,000 of these tractors were built. 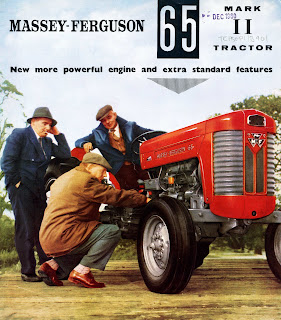