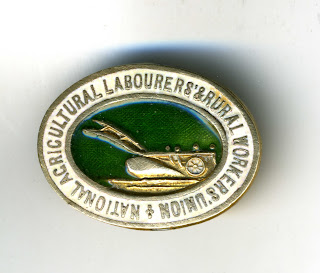 Periodic name changes to the union representing farm workers eases the task of dating associated material. In this case, the membership lapel badge has its title as the National Agricultural Labourers' & Rural Workers' Union which places it between 1912 and 1919. It was made by Fattorini & Sons, a family dynasty of jewellers and medal makers in Birmingham and the north of England with a pedigree running from the nineteenth century through to the present day.

The NALRWU was the successor body to the Eastern Counties Agricultural Labourers' and Small Holders' Union which was founded in Norfolk in 1906 with the great George Edwards (1850-1933) as its secretary. Going national in 1912 prompted the name change.

Widely scattered in small units, and with accommodation often tied to the job, farm workers have never found it easy to put effective pressure on their employers to improve pay and conditions. A national strike in 1923, following the scrapping of minimum wage agreements, eventually petered out amidst recrimination and little tangible gain. Still, today, an Agricultural Wages Board, with representatives from both sides sets on an annual basis the minimum rates of pay for the six defined grades of farm worker. 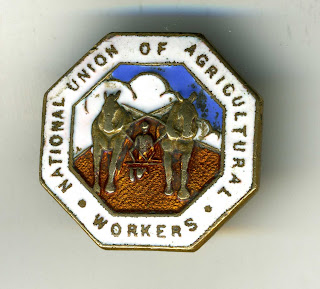 Union membership rose dramatically during and immediately following the Second World War, peaking at a little over 179,000 in 1948. Thereafter, it fell into a steady decline and by 1962 was down to 131,000. The marked shrinkage of the farm labour force, as increased mechanisation took hold, is a defining feature of the countryside in the second half of the century. It meant that a free standing union was less viable, to the point where today it operates as the rural and agriculture element of Unite.
Posted by Roy Brigden at 04:38