An important strand that will be developed as this project progresses is one that links popular music with the countryside and brings in such factors as alternative lifestyles, youth culture, social protest and environmentalism. The music festival embodies them all. In the modern era, the journey began with the Beaulieu jazz festivals on Lord Montague's estate in Hampshire 1956-61, where opposing followers of modern and trad jazz knocked spots off each other, and ended the century with the counter culture pillar of the establishment that Glastonbury ultimately became. The three Isle of Wight festivals of 1968-70 are landmarks along that road so we have acquired a poster from the last of them because it represents a watershed moment in music festival history. 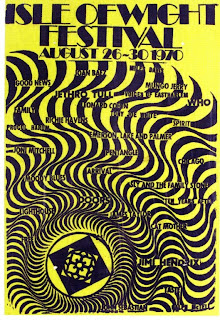 This is not connected with the organisers' promotional artwork that was done by David Fairbrother-Roe but part of a range of printed material produced unofficially in the encampment on site and sold to festival goers.

With opposition from local authorities and residents mounting following the previous year's event, the 1970 festival was hard pressed to find a venue on the island and was ultimately obliged to make do with a farmland site at Afton Down. This was bound to cause problems because the main arena was overlooked by a great hillside, beyond the perimeter fence, where fans could and did camp out and watch the proceedings for nothing. So it was that at least half a million people turned up - more than to any other comparable event since - on a gloriously sunny bank holiday weekend to witness a glittering line-up of acts, including Jimi Hendrix giving his last public performance, amid a mix of chaos, confusion and recrimination that roused a nation and ensured that nothing quite like it would ever happen again. 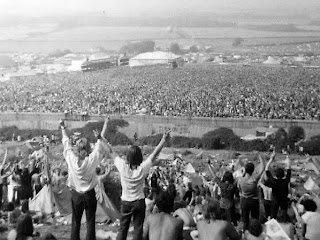