These panels were purchased at auction in the West Midlands recently. Both present the hard physical nature of farm labour at harvest time rather in the manner of the nineteenth century - Millet's The Gleaners of 1857 and Sir George Clausen's The Mowers of 1892 come particularly to mind. The first panel is called Reaping - although the tool being used is a scythe not a sickle so technically the title should be Mowing - and the other Binding. By the time they were created both these operations of cutting the crop and tying it into sheaves had largely been mechanised. But the purpose here is the noble depiction of rustic labour for a metropolitan audience. 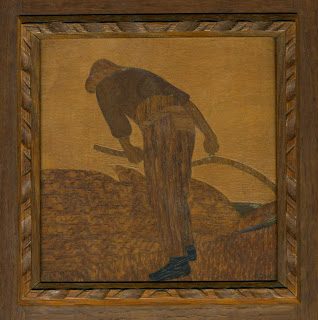 Albert James Rowley (1877-1944) set up his picture framing and gilding business in Kensington in 1898. He was an artist/craftsman himself in the Arts and Crafts tradition and moved in the artistic circles of both London and Ditchling in Sussex (which included Frank Brangwyn and Eric Gill) where he subsequently had a house. 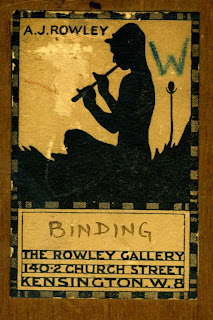 In the years leading up to the First World War, the Rowley Gallery began to produce inlaid wood panels like these, some designed and made by Rowley himself as here, and others by invited artists including his friend William Chase (1878-1944). The distinctive Pan label on the reverse of the panels, to a design by Chase, was introduced in 1912. 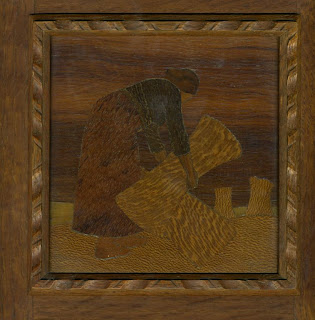 The Gallery's output expanded through the 1920s and 30s, particularly with the addition of Albert's son Laurence to the business, from panels into decorative mirrors and items of furniture. The Rowley Gallery still trades in Kensington today, although the family is no longer involved.
Posted by Roy Brigden at 07:55