Its connection to the village arts and crafts movement at the beginning of the twentieth century, together with a local link, has brought this item into the project collection. 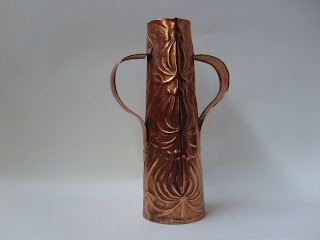 It comes from the Berkshire village of Yattendon where a metal-working evening class for young men was organised for more than twenty years until the outbreak of the First World War in 1914 by Elizabeth Waterhouse (1834-1918). She and her husband Alfred, the distinguished late Victorian architect, moved to Yattendon in 1881 from nearby Reading, having purchased the estate and begun building a new country house for it a few years earlier. (Their previous home, Foxhill, is now part of the University of Reading and the Museum of English Rural Life is housed in another Waterhouse building which was originally designed for biscuit manufacturer, Alfred Palmer).

Elizabeth Waterhouse deployed her literary and artistic skills to play an active part in the life of the local community. The idea for the evening class came from the same root as the Keswick School of Industrial Arts (see earlier post) and other initiatives around the country. It was affiliated to the Home Arts and Industries Association which came together in 1884 with philanthropic aims to stimulate handicrafts in rural districts, give young people something useful and wholesome to do in their spare time, and create avenues of communication between the educated and labouring classes. 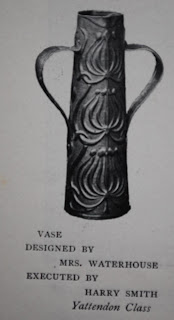 The Yattendon class made a wide range of repoussé copper and brass items for domestic use, often to designs by Elizabeth Waterhouse herself, which grew in reputation with the help of awards won at the Association’s annual show at the Albert Hall. Over 5,000 pieces were made in total and sold through a shop in the village, at Liberty’s in London and other outlets. 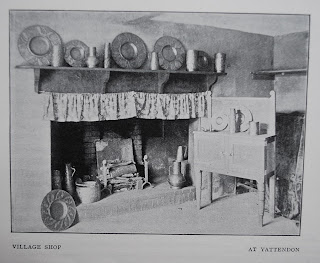