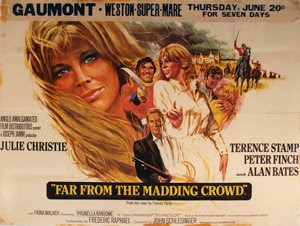 This is an original poster for the film of Hardy's first successful novel, published in 1874, and set in his own 'partly real, partly dream country' of Wessex. The strip taped along the top referring to Thursday June 20th connects it with a 1968 showing.

At the time this was the most authentic big screen adaptation of a Hardy work. It was directed by John Schlesinger, scripted by Frederic Raphael, photography was by Nicolas Roeg and the folk-based musical score was by Richard Rodney Bennett. Julie Christie starred as Bathsheba Everdene, Alan Bates as Gabriel Oak, Peter Finch as William Boldwood and Terence Stamp as Sergeant Troy. Cinematically, Schlesinger subsequently regretted following the novel too closely, making for an over-long film and pedestrian plotline with lots of epsiodes (the story was originally written in serialised form). Doubts were expressed at the time about Julie Christie in the main role and the implied addition of a 1960s style feminist agenda.

Shot on location at more than 20 sites around Dorset and Wiltshire, one of the film's strong points is its powerful portrayal of Hardy's Wessex through Roeg's cinematography. David Shipman in his two volume 'The Story Of Cinema' (1982) declared that there had never been a better film about the British countryside.
Posted by Roy Brigden at 07:25