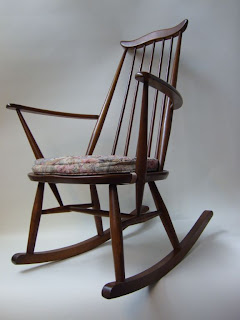 Ercol furniture is unquestionably one of the great style success stories of the twentieth century. It’s a survivor, never quite sinking out of fashion before a new retro wave brings it bobbing back up again. It also has a rural connection, which is why this Goldsmith rocking chair from the 1960s (design number 435) has been added to the collection. 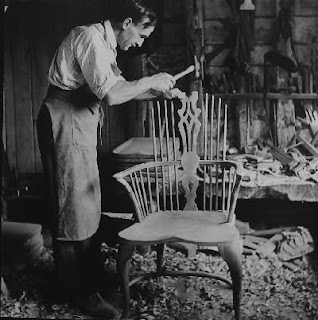 The firm is rooted in the traditional craft of chairmaking centred on the Buckinghamshire Chilterns. For hundreds of years, generations of bodgers worked away in the extensive woods of the area turning legs and spindles from the native beech which they supplied to the chair makers in and around High Wycombe for onward distribution to London and beyond in their thousands. These chairs, with their adzed elm seats, came in many different variants but have been generically known since the eighteenth century as Windsor chairs. 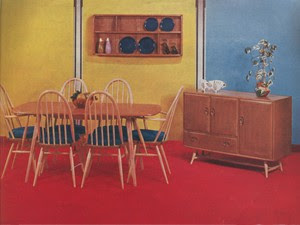 Lucian Ercolani, a young Italian designer, started making furniture in High Wycombe in 1920. His big break came in 1944 when he won an order from the Board of Trade for 100,000 low-cost chairs which he met by re-working the basic Windsor form into a chair that could be mass-produced. He went on to exhibit at the Britain Can Make It exhibition in 1946 and the Festival of Britain in 1951 where the light, simple but modern feel of his new-look Windsor furniture was a hit with cash-strapped post-War home makers. 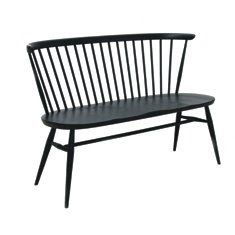 Many of the classic Ercol lines are still produced today, along with more contemporary styles, at the firm’s purpose-built factory now located in Princes Risborough.
Posted by Roy Brigden at 08:30