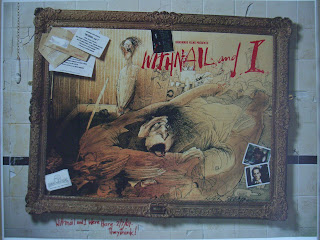 An earlier comment to this blog suggested that the way that the countryside is depicted in films, TV programmes etc is an important area for this project to address. Film posters are a way of representing that so here’s one that was picked up at a recent Christie’s sale. This is an original poster dating from the first release of the film in 1986 and with artwork by Ralph Steadman.

Withnail and I was written and directed by Bruce Robinson, starred Richard E.Grant and Paul McGann and was financed by Handmade Films – George Harrison is in the credits as a producer. It has achieved the status of a cult classic in spite of being only moderately successful initially at the box office. There are websites devoted to the film and numerous clips are to be found on Youtube. Sleddale Hall near Shap in Cumbria, the farmhouse where much of the shooting was done, became a pilgrimage site for fans and was sold in its derelict state in early 2009 amid huge publicity.

The film is set in the 1960s and follows two out of work and heavy drinking actors who seek escape from the squalor of their London flat for a sojourn at uncle Monty’s cottage in the country. Its grim and darkly funny portrait of the countryside features a gallery of sinister rural caricatures. In popular culture we seem to want the countryside to be either pastoral and idyllic or strange and menacing. It is a common theme to set out expecting one, only to find the other.
Posted by Roy Brigden at 09:02

Labels: film poster, Withnail and I