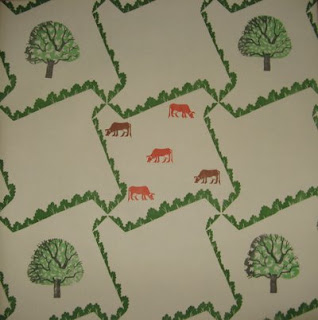 This was one of a number of wallpaper designs produced by Edward Bawden (see earlier post) in the 1920s. At first laboriously hand-printed by Bawden himself using the lino-cut method, they were adopted by the Curwen Press in 1926 and became more widely available as lithograph printed papers. A sheet of the Trees and Cows design has been acquired for this project. A tranquil, if rather mesmerising, rural motif like this brought a touch of the countryside into urban and suburban homes of the pre-War era.

The Curwen Press was founded in 1863 in Plaistow, East London and was initially primarily concerned with printing music. The founder’s grandson, Harold Curwen, was joined by Oliver Simon in 1920 and together they breathed new life into commercial art and design of the period. Simon had connections at the Royal College of Art (his uncle was Principal) which enabled him to sign up artists such as Paul Nash, Eric Ravilious and Edward Bawden for a range of projects from book illustration to lettering to advertising posters. Bawden frequently worked for the Press and contributed in the later 1930s a number of illustrations for the You Can be Sure of Shell poster campaign, like the one of Blandford Forum below. 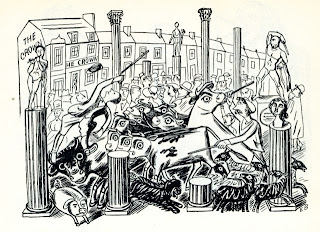