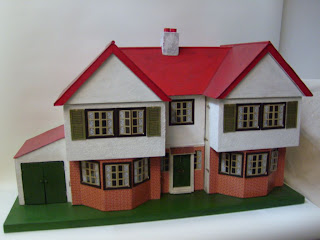 This classic dolls house from the 1930s, known as 'The Stockbroker House', has been added to the project.

The 1930s brought suburbanisation to new heights. More and more people wanted to be in touch with the countryside, have their own garden, and commute to the town. Unchecked ribbon development was often the result. 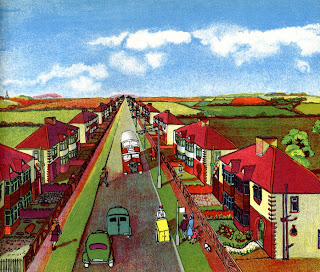 Suburban house designs drew on clichéd rural styles of the past with pebbledash, mock Tudor features and latticed windows much in evidence. Of course, these houses also now had electric lighting, indoor bathrooms and a garage. The dolls house shows how deeply embedded these aspirations were in our culture, right down to the level of children’s play. 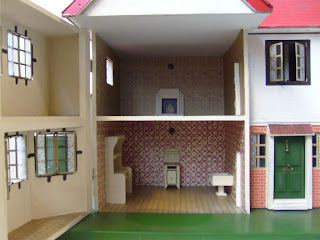 George and Joseph Lines, trading as Lines Bros, were important toy makers of the nineteenth century. They were making dolls' houses by the early 1900s. Joseph's three sons set up their own similar business after the First World War with the trade name Triangtois. On the death of Joseph Lines in 1931, the two firms united under the name of Tri-ang Toys. They made a range of dolls houses in the 1930s, including some in the modernist style, but the most popular were the mock-Tudor suburban models. 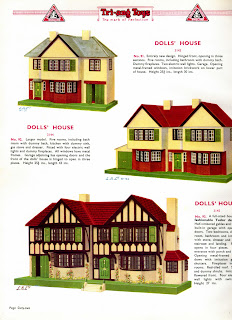 This reminded me of an Underground Electric Railway Company poster of 1908 in London's Transport Museum's collections: http://tinyurl.com/goldersgreen . It shows a typical surburban house with a green and leafy walk to the distant tube station; another poster of 1910 proclaims 'Golders Green for healthy homes'. Of course, this suburban paradise was soon swallowed up by the city that its inhabitants were escaping.

The first house pictured is a no 92 - the number 93 is known as the "Stockbroker" - this is the bottom one on your catalogue page.