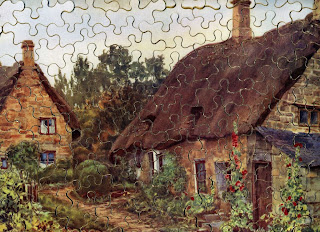 This is a 120 piece wooden jig-saw puzzle entitled A Cotswold Alley. It comes from the heyday of the jig-saw's mass popularity as a family pastime in the 1920s and 30s. The classic cottage scene it depicts follows sentimental rural imagery that has dug itself into English culture over the last two hundred years as industrialisation and urbanisation took hold. This 'chocolate box' image of the countryside strenghtened in potency through the twentieth century and was deployed commercially at all levels. 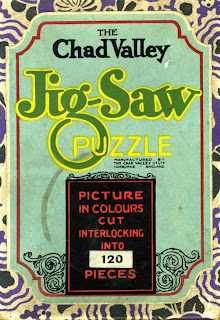 Chad Valley traces its origins to a printing company set up by Anthony Johnson in Birmingham in the early nineteenth century. By the end of the century, the firm had re-located to the Chad Valley Works at Harbourne and was diversifying into the production of cardboard games. Between the two world wars, the company established its reputation as a major toy producer. The Chad Valley trade name was acquired by Woolworths in 1988.
Posted by Roy Brigden at 07:45

I think an object or collection from a film or TV series that has dealt with rural life would be appropriate to collect. The screen has been a significant medium for representing the countryside and rural life. Documentary, TV programmes, and feature films have depicted rural life in a variety of ways and have informed the way many people think about the countryside.

Scripts, posters, props, and promotional material could be collected for films such as Far from the Madding Crowd (1967), Kes (1969), or films made by the British Transport Film Unit.