The car and the countryside

The motor car’s impact on the countryside over the twentieth century was of course immense and will be explored at a number of points in this project. From the beginning, rural imagery has been deployed to sell cars and present them in a positive light. Prior to the First World War, motor cars were predominantly the preserve of the ruling elite and the rich enthusiast. It was in the inter-War period that cars moved into the realm of the middle class and began to exert a powerful influence on patterns of life and work and recreation. By the 1960s, the car had moved further to become a mass consumer item with all the resulting pressures and consequences that have continued to unfold since.

Two advertisement illustrations below, both from Country Life, relate to the earlier part of the story. The first, from Easter 1915, shows a couple taking what by implication looks like a proprietary spin around the estate in their large stately Daimler. The message is that the car is at one with the solid and traditional values of the rural landscape beyond and is also fit for a wounded hero to travel in, whilst perfectly capable of being handled by a woman. 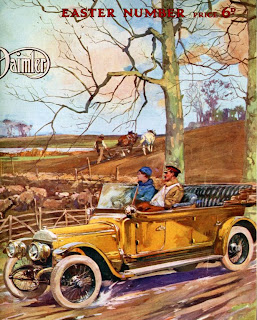 The second is only a few years later, 1923, but the image is subtly different. The car is not just passing through the countryside but here is part of it and is a vehicle of work rather than purely leisure and with a farmer owner, albeit one of the more well-heeled variety. 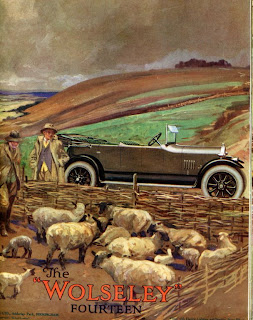