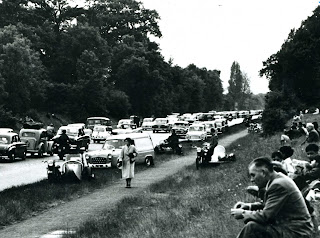 My father first bought a car in 1961 - a Ford Popular, like the second vehicle from the left above - and as far as I am aware he never used public transport again. One pound would get you four gallons of petrol and the ritual Sunday afternoon excursions into the greener corners of Kent and Surrey - along with most of South London's population - are part of childhood memory. Summer holidays would see daring expeditions to unknown parts, the west country or North Wales perhaps, which in pre-motorway days might take 12 hours on the road and encounter major traffic bottlenecks at every market town along the way.
Posted by Roy Brigden at 06:48

The car also hand an enormous impact on the establishment of our heritage institutions and shared national identity – both linked with the countryside. The expansion of the National Trust and the development of country house visits was down to the increased access to the motor in the 1960s. Access to these buildings and estates is an important part of how people began to interact with the landscape in new ways, and to how they viewed the history of the countryside.