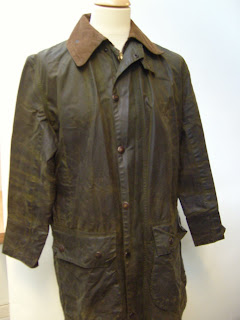 A classic Barbour waxed jacket has now been acquired as part of this project. It dates from the 1980s when the Barbour made that cultural breakthrough from looking good in the field to being part of urban chic. In the punk and post-punk world of anti-establishment anti fashion, it was seized upon by the metropolitan elite, and its aspirants, as a counter symbol of an unchanging order and of the solid and practical virtues often associated with the countryside. 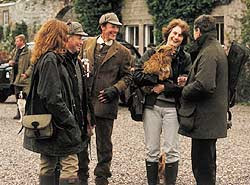 In fact, the Barbour story itself is quite prosaic. John Barbour, from a farming background in Galloway, established a drapers shop in South Shields in 1894. Workwear was one of its specialities, including oilskins for the fishermen, shipbuilders, farmers and shepherds of the area. From 1908, mail order was an important part of the business, and in the 1930s a successful range of oiled cotton suits for motorcycle wear was introduced. 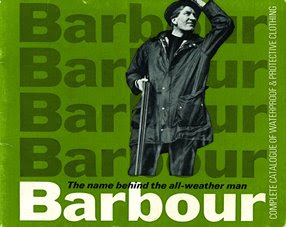 During the War years and after, its reputation for heavy duty weatherproof outdoor clothing for both civilian and military use grew and then it was in the early 1980s that a new range of light jackets - the Bedale, the Border and the Beaufort - was introduced for the wider leisure market with appeal to town and country alike. 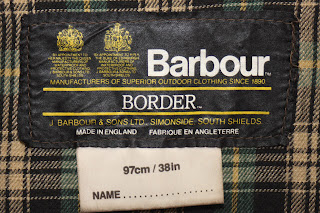 How do you date a Barbour?
Look at the Royal Warrants. Barbour received Royal Warrants from the Duke of Edinburgh in 1974, Her Majesty the Queen in 1982 and the Prince of Wales in 1987. Our example has the first two warrants but not the third so dates from between 1982 and 1987. 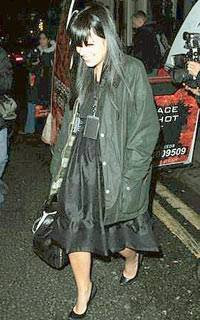 Our example comes from Yorkshire. It has encountered barbed wire fences and has the patches to prove it. The closest many Barbours come to a flock of sheep now is the crowds at Shepherds Bush market. From the Sunday Sun, April 2008: 'They were once the preserve of royalty and farmers but now it appears Barbour jackets are becoming the latest fashion fad for trendy pop singers and celebrities.

The all-weather country jackets are usually worn during field sports or for working outdoors in the country. But it appears young urbanites don’t care about the brand’s former Sloaney connections and are turning it into a must-have style trend.

Sir Bob Geldof’s daughter Peaches wore hers with a pair of hot pants at Glastonbury, while Lily Allen even performs gigs in hers. The celebrity endorsement has sent tills ringing at the South Tyneside-based business, which employs 450 people at its offices in South Shields, and has seen turnover hit £65m'.
Posted by Roy Brigden at 06:44

Great for Black Friday Jacket. Thanks so much