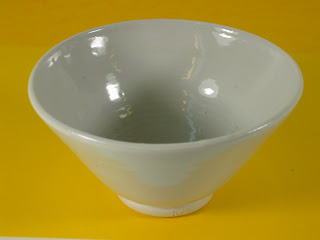 I thought the project should include a piece by Ursula Mommens (1908-2010) who spent most of her long adult life - she died earlier this year aged 101 - as a potter. Her metropolitan cultural and artistic connections were impeccable but yet from a rural setting she dedicated herself to producing spirited but practical household wares. She was the great granddaughter of Charles Darwin and great great granddaughter of Josiah Wedgwood; her father, Bernard Darwin (1876-1961) was for fifty years golfing correspondent of The Times and Country Life; she studied at the Royal College of Art and, after setting up a studio near the Darwin home at Down in Kent, by the mid-1930s was active in the London avant garde art scene along with her first husband, the surrealist Julian Trevelyan. A spell working with the great slipware potter Michael Cardew set her on a new course of unpretentious and useful country ware and in 1951 she established a pottery with her second husband, the sculptor Norman Mommens, at South Heighton near Newhaven in Sussex where she remained for the rest of her life. After working initially in earthenware, stoneware became her principal medium from the 1960s, for sensitively decorated, soundly functional tableware. 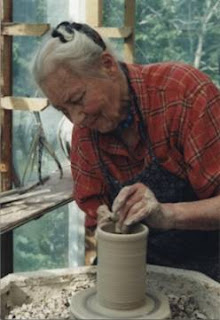