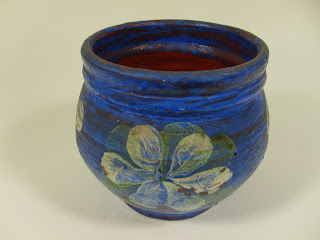 Here's something from another equally well-connected twentieth century potter. Quentin Bell (1910-1996), product of the unconventional marriage between Clive and Vanessa Bell, grew up amongst members of the artistic and literary Bloomsbury set who were frequent visitors to Charleston, the farmhouse near Firle set idyllically into the Sussex downland, that his mother occupied from 1916 through to her death in 1961. It's outwardly an eighteenth century building with a sixteenth century inner core but, from the unique interior decoration applied by Vanessa Bell and her friends, is best remembered now as perhaps the clearest physical expression of the twentieth century connection between art and the countryside. 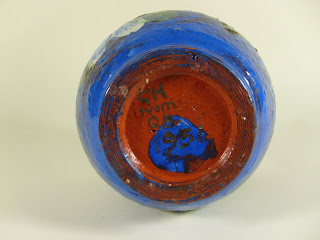 The base of the pot is inscribed GH from QB 1951 and we know from the provenance that this was a present, Christmas or birthday one imagines, from Quentin Bell to Grace Higgens, who worked at Charleston as variously maid, nurse, cook and housekeeper for fifty years from the age of 16 in 1920. An indispensable part of Charleston life, she was close to the leading players and her own extensive archive of diaries and correspondence is now in the Briitsh Library.

Quentin Bell continued his potting but was also part of the academic world, as a professor of fine art in the 1960s and 70s, and also wrote an acclaimed biography of his aunt, Virginia Woolf, which was published in 1972. 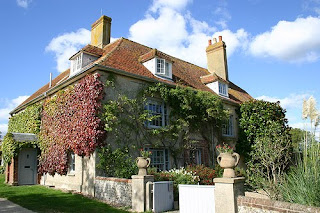