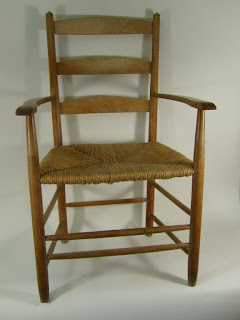 Made of ash and with a rush seat, this is a chair with important connections that place it firmly within a continuing tradition of English country furniture. It was made by Edward Gardiner (1880-1958) and was one of a number originally supplied in the early 1950s to the Craggs sisters' famous tearooms in the Suffolk coastal town of Aldeburgh. Here, for the rest of the century they did service to tourists, Festival goers and locals alike. (Photo below by Charles Christian) 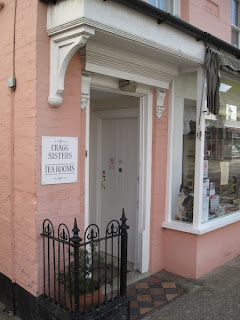 Along with the chair, we purchased some bills and correspondence relating to Gardiner's dealings with the Craggs over some years. 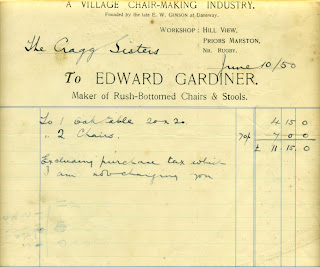 The Gardiner connections span the entire twentieth century, and indeed tip beyond it at either end. He learned his chairmaking from Ernest Gimson (1864-1919) and was a partner in Gimson's business based at Sapperton in Gloucestershire from 1904-13. Gimson had many talents and moved in the inner circles of the Arts and Crafts movement. His furniture style was much influenced by the guidance of Phillip Clisset in Herefordshire in the 1890s and refined further by contact with the brothers Ernest and Sidney Barnsley, with whom he moved to Gloucestershire in 1893 for the purpose of putting the countryside at the heart of their respective businesses. 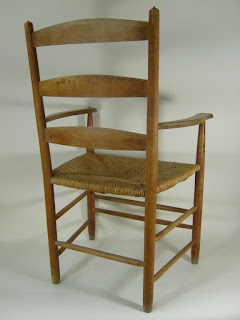 After the First World War, Gardiner set up on his own at a workshop near Rugby in Warwickshire, where our chair was subsequently made, essentially to a Gimson design. In 1939, Gardiner took on a pupil, Neville Neal, who, after Gardiner's death in 1958, continued in business from a workshop in nearby Stockton. Today, Neville's son Lawrence continues the tradition of chairmaking there, and will happily supply a new chair very similar to ours (the Bedales No.1) for around £315. (See www.lawrencenealchairs.co.uk)
Posted by Roy Brigden at 04:05

Anyone wanting to know more about Philip Clissett, including a vast range of his chairs, should have a look at www.philipclissett.co.uk