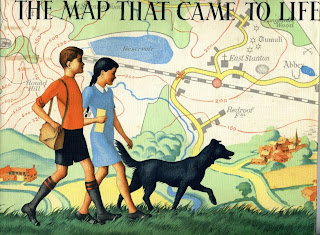 This is a children's book that captures the essence of what the countryside meant to post-War England. Ours has a hand-written dedication on the inside page:

It tells the story of John and Joanna who are spending the summer holidays at their Uncle George's Two Tree Farm. The children decide to walk the 'few miles' to Dumbleford ( a striking measure of the change in attitudes to child supervision between the middle and the end of the century), where there is to be a country fair, taking with them an Ordnance Survey map for guidance and Rover the dog for company. Along the way, they have some adventures and encounter different aspects of the country scene. 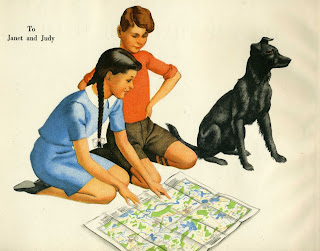 The sub-plot to the story is the lesson in map-reading and how maps help in the interpreation and understanding of the landscape. 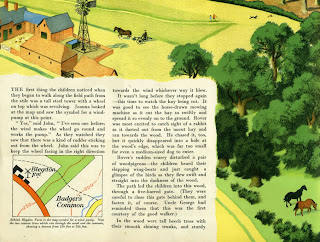 The book was first published by Oxford University Press in 1948 and was the work of Harry Deverson (1908-1972), a picture editor well-known in the magazine and newspaper world, who produced the text and his brother-in-law Ronald Lampitt (1906-1988) who was responsible for the illustrations. Lampitt's work spanned a wide range of popular commercial art from posters for the Great Western Railway in the 1930s to magazines and books, including Ladybird books, over the following decades. In respect to this book, his time spent in RAF intelligence during World War II producing drawings from maps for bomber crews seems to have been a decisive influence. Here we have a countryside as seen from the air with all the features indicated on the map carefully picked out on the ground. 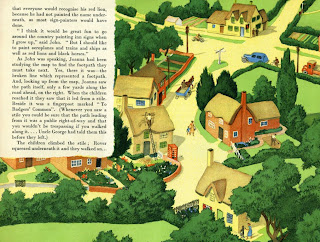 For someone who lived through the War and who spent most of his adult life in Sidcup, on the outer fringes of the London suburbs, it is also an idealised countryside of the mind. In clear melodious colour, past and present, Man and Nature are in perfect harmony with not a storm cloud on the horizon. 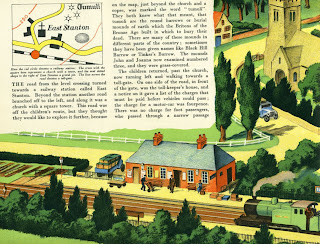