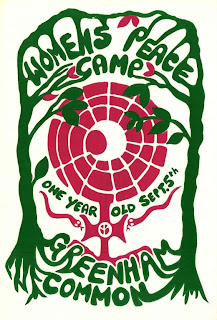 This poster was produced to mark the first anniversary of the day on 5th September 1981 that a Welsh group, Women for Life on Earth arrived at Greenham Common airbase in Berkshire, having marched from Cardiff, to protest at the NATO decision to site ground launched cruise missiles there. A peace camp was set up outside the main gate and remained for 19 years.

The military justification for the missile deployment was one of the more bizarre low points in the Cold War with the USSR. In times of maximum tension, the missiles - and there were 96 of them, each with a nuclear warhead 16 times more powerful than the Hiroshima bomb - would be dispersed on special transporters from their silos at Greenham out across the countryside where their capability remained beyond the reach of pre-targeted missiles in the Eastern bloc. For training purposes, the cruise convoys would make regular week long forays to Salisbury Plain and these became a particular focus for demonstration and protest by the women's peace camp and its network of supporters. 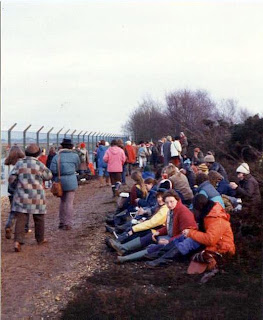 The peace camp was joined by many other protestors for the big set piece demonstrations, as in December 1982 - see image above - when 30,000 women took part in the exercise 'Embrace the Base' and September 1984 when 50,000 women camped around the base's 9 mile perimeter fence. Such events hit the headlines worldwide and the authorities struggled, numerous court actions and evictions notwithstanding, to outflank the peace camp's underlying strategy of non-violent protest.

The cruise missile programme was brought to an end by the Intermediate Nuclear Forces treaty of 1987 and the last convoy departed in 1990. The airbase, which had first appeared in the 1940s, was later sold to the Greenham Common Community Trust and much of the heathland area has reverted to public use. It is a Site of Special Scientific Interest and the former missile silos are officially recognised as historic monuments. A Commemorative site now occupies the land previously occupied by the peace camp, close to the former main gate of the base and next to a new business park. 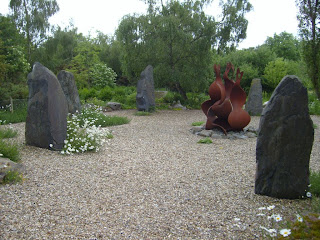 Part of the site is dedicated to Helen Wyn Thomas who was killed by a police horse box on the main road just by the camp in 1989. 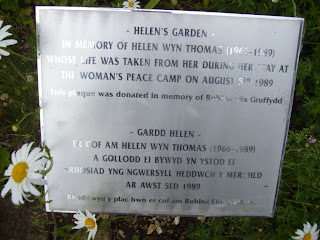 The peace camp itself remained until 2000, having turned its attention in the final years to the nuclear warhead assembly and servicing facilities at nearby Aldermaston and Burghfield. Strange that this rural part of Berkshire should have become so closely identified with weapons of mass destruction in the later twentieth century.
Posted by Roy Brigden at 09:03