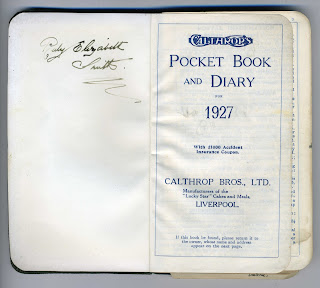 Ruby Elizabeth Smith was 18 when she started keeping this diary at the beginning of 1927 and she stuck to the task consistently over the course of the year. The diary itself bears the stamp of Liverpool-based livestock feed merchants Calthrop Bros Ltd, and is of the type that would have been issued to regular customers at Chrstmas in the hope of continuing business in the year to come. Ruby lived with her parents and younger brother and sister, Eric and Violet, on a small farm at Licks Head, Ramshorn, in Staffordshire - west of Ashbourne and north of Uttoxeter. The brief but regular diary entries provide a window into the life of this young woman. 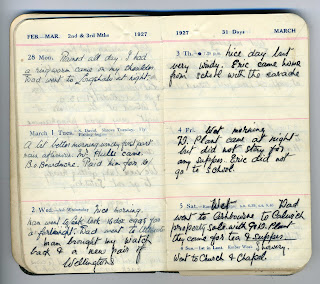 She spent her time helping with the milking and other farming tasks, with housework and making her own clothes. There was usually a piano lesson once a week and attendance at both church and chapel every Sunday, presumably to provide musical accompaniment for the singing. Her father often goes to Uttoxeter or Leek on a Wednesday, to sell eggs and buy little necessities - in this case it's a new pair of wellingtons for Ruby, (an early reference to this kind of footwear) perhaps to make up for the ringworm that she's complaining of on the Monday. 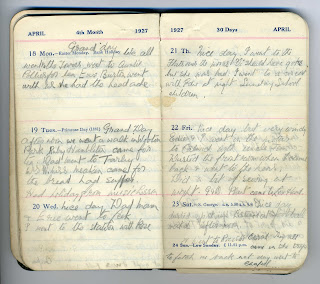 There are entertainments too: a frequent flow of visits from neighbouring relatives, the occasional party or dance, and on Easter Monday they all go off to nearby Alton Towers - the ancestral home of the Earls of Shrewsbury, with its fine house and gardens, was taken over by a consortium of local businessmen in 1920 and opened as a tourist attraction four years later. 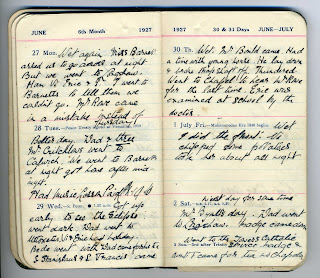 On the 29th June, she gets up early to experience the total eclipse of the sun, and then much of July and into August is spent dodging the showers and downpours and trying to make some decent hay. 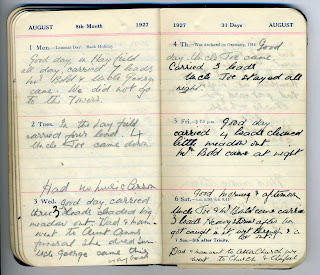 There is a new round of haymaking in late September before the diary entry for 5th October underlines in relief the words Finished the Hay . Then it's on to collecting damsons and other fruits for sale. In December, there is a flurry of chicken and produce selling, and playing for a local performance of Aladdin before things wind down to a white Christmas. 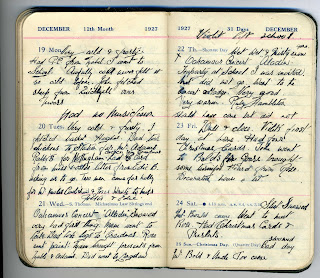