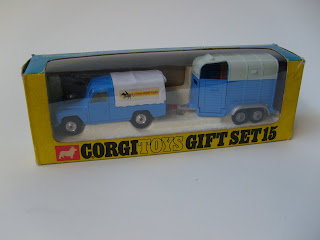 The story of the Land Rover has come up before - how it was introduced in 1948 as a general purpose agricultural vehicle and subseqently morphed into a urban style icon - because of what it says about the wider cultural tentacles of the countryside in the second half of the century.

These two model sets illustrate that process of transformation. Both are by Corgi Toys, a brand launched by the Mettoy Company in 1956, and both comprise Land Rover and horse trailer combinations with Pony Club transfers. The Pony Club, an umbrella organisation for young riders, dates back to 1929 but its membership really took off during the 1950s and had reached over 31,000, spread through 255 UK branches, by 1962. 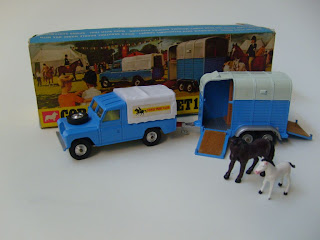 The first set is one that was introduced in 1968 with a short wheel base Land Rover, canvas top, normal livery and sandard wheels. This is still identifiably a farm vehicle.

The other one dates from 1979 and incorporates some significant differences. Now it is a long wheelbase Land Rover with flashy metallic colouring, big chunky wheels and a definitely non-agricultural roof accessory. 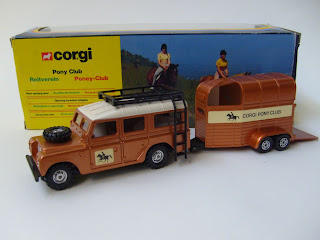 The journey towards the Chelsea tractor had begun.
Posted by Roy Brigden at 00:39