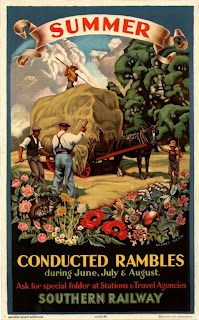 This is the most colourful of the posters we have acquired through the project to date. It is the summer number in a series of four - one for each season - created by in-house poster designer Audrey Weber (1917-50) for the Southern Railway. Very deliberately, the countryside is visually depicted in the most attractive light in order to draw suburban commuters waiting on noisy and crowded platforms to the tranquil joys of rambling. The date is 1936, just a year after the formal creation of The Ramblers' Association which provided a national focus for what had become a highly popular pastime. The Southern Railway served counties to the south and west of London and had an obvious commercial incentive in promoting leisure journeys out into the countryside rather than just business travel into the city.
Posted by Roy Brigden at 04:26