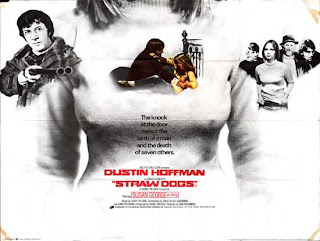 Coming only a year after The Go-Between, this is a very different film that paints a very different picture of the countryside. A mild-mannered American mathematician retreats from the urban jungle and seeks solace with his English wife in a quiet Cornish farmhouse. But he finds an even greater primordial menace within this sleepy village which ultimately brings out terrifying violence in himself. Dustin Hoffman and Susan George star along with a full line-up of sinister yokels. Directed by Sam Peckinpah and shot in the St Buryan area of Cornwall, it has been described as a West Country horror western. It attracted notoriety both at the time and since for its scenes of sexual and physical violence. Few films can have featured a man trap - that staple of the rural museum collection - quite so dramatically.
Posted by Roy Brigden at 08:26