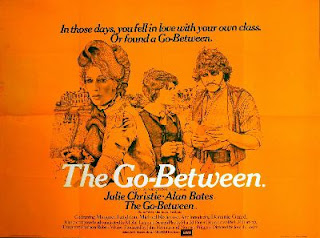 Harold Pinter wrote the screenplay for the film adaptation of L.P.Hartley's 1953 novel The Go-Between with the classic opening line: 'The past is a foreign country: they do things differently there'. The film was directed by Joseph Losey and starred Julie Christie and Alan Bates amongst others. It won the Grand Prix at the 1971 Cannes Film Festival and in 1999 was included in the British Film Institute's list of 100 best British films.

The poster artist was Arnaldo Putzu, one of a number of young Italians brought over by Eric Pulford and the Downton film publicity agency from the later 1950s. Get Carter was another of Putzu's well known film posters.

In addition to the poster, we also have a set of front of house cards - photographic stills from the film that would be displayed behind glass at the cinema entrance or in the foyer to attract custom. 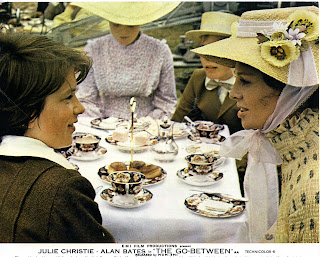 Set in a hot languid summer of the early 1900s, the beguiling scenery and mannered behaviour masks a harsher reality of emotional turmoil beneath. The countryside is used here both as a metaphor for lost youth and innocence and as the physical embodiment of a stifling class system. It was shot in and around the empty and semi-derelict seventeenth century Melton Constable Hall in North Norfolk, former home of Lord Hastings and an appropriate setting for this story of the grandeur of a past age.

I love this film. It is definitely one of my top ten favorites. The Pinter screenplay with its flash-forwards is challenging but appealing. I guess I like it because stories are rarely told that way (See Pinter's treatment of "Betrayal" with Jeremy Irons and Patricia Hodge). The performances, editing and music are outstanding. Newcomer Dominic Guard was perfect for this role. Tell me, any idea about who played Julie C.'s grandson in the flash-forward closeup? He looks very much like Alan Bates. Thanks!