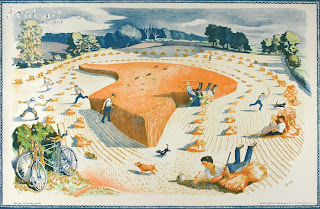 The twenty-four School Prints were produced by a process known as auto-lithography in which the artists themselves applied their designs directly to the stone block. It was this that enabled the company, somewhat controversially, to term them as ‘original’ lithographs. They sold in large numbers to both schools and the general public and captured a mood in those early post-War years.
Posted by Roy Brigden at 01:05