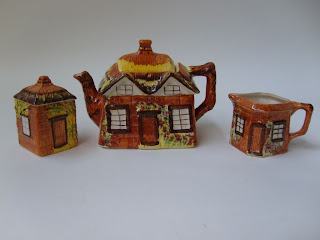 Kitsch is probably the word that would now most immediately come to mind here. But there is a lot of cottage ware still around from a variety of makers which suggests that it must have been widely popular at the time. It's those cosy cultural associations of the thatched cottage working their magic again. This set was made by Price Bros (Burslem) Ltd, a firm that began in 1896 and continued after 1962 as Price and Kensington Potteries Ltd. The design, number 845007, was registered in 1945. 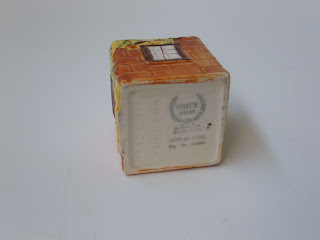 This was a present for your auntie in the era of post-war austerity, with the old design imagery of the '30s still holding sway before '50s fashion found its feet. There is no sign of these sets actually having been used so I suspect they went into the glass cabinet in the front room, for show, which helps to explain why so many have survived. 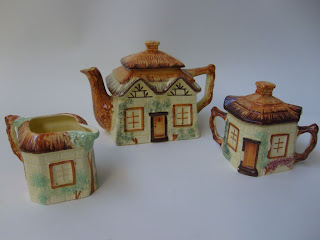 The other set in this genre is by the Keele Street Pottery of Stoke whose origins go back to 1915. After being closed during World War Two, production resumed in 1946 and cottage ware was added to the range shortly after. As a way of rebuilding the nation's finances, there was much emphasis at the time on the export trade and the connection here of tea drinking with rustic imagery from the old country found much customer interest overseas. 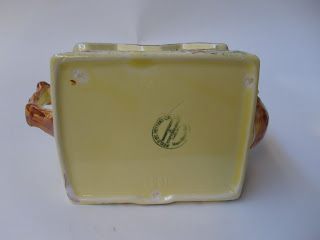 I have just purchased a Ye Old Cottage Ware Tea Pot in Melbourne Australia. It has a registration no of 845007. I just love it. It has a very small chip on the lid but otherwise it is just lovely. I am going to go in search of the creamer and sugar bowl

I have the whole set of cottage ware(845007) that my mother left me. I love it but must downsize and this is on the list to "go". We lived in England when she purchased it and coincidentally, my son lives in Melbourne with his wife. There is only slight crazing on a few of the items, and the tiny tea cup has a chip and the saucer was dropped and repaired but everything else (milk jug, teapot,cookie jar, 4eggcupson plate and more)is in real good condition. You can contact me if you would like more info on acquiring.

I have a full tea set (7 pieces),creamer has chip on rim. No reg # but has ENGLAND and PPC incised on all but creamer which has ENGLAND
y
PPC
Can anyone tell me approx date and value. colours are softer than shown on site.

thank you for posting this info. i just came across an adorable cheese keeper from this set and i was unsure of the age.

I have inherited a single Keele St cottage ware teacup and am trying to pass it onto a teaset collector looking for a missing cup! Any ideas?

I have gained over time a complete set of the Price Bros Ltd and Price Bros Kensington respective sets. A very infectious collection and I get a buzz from just looking at them as a reminder of my grandparents and as a gift for my sons when I am gone. Unfortunately both boys have threatened to sell them when I go....go figure.happy collecting, the sets are bigger than you think.

It took me ages to find a P/K cheese/butter dish, and after that I went a bit crazy!!! Reminds me of my childhood and I like to think the collection could be of value to my grandchildren one day

Hi, I'm an avid collector of cottage ware and am looking to talk to other collectors. I live in Queensland, Australia and have not met many other collectors of this type of pottery. I have never sold any of my collection much to my childrens annoyance ! I've been collecting for 35 years and still adding to the collection now

I got hooked on Cottageware the very first time I watched the steam puffing out of the chimney of the teapot on a cold winter day. I then got carried away and now have an extensive collection of the Price Bros set as well as the Price Kensington set. I even visited the factory in Stoke on Trent about a decade ago and before it apparently closed its doors. Due to downsizing I'm considering selling it ... Seems a shame to break up the whole collections but it appears to fetch more as individual pieces.